Mohammed is currently attending DePaul University where she is majoring in MIS and minoring in Community Service. She aspires to pursue a career in Law. She worked with the Democratic Party of Evanston in support of Laura Fine and Jan Schakowsky where she attended meetings, held phone banks, and gathered signatures in the area. Working with Laura Fine during her senior year of high school heightened her passion for a push for quality education. Mohammed worked as an election judge her senior year where she became more interested in her community. Mohammed has been part of several charity organizations in hoping to make the world a better place. She worked with organizations such as Feed My Starving Children, The Chicago Coalition of the Homeless, and The Humanity Projects throughout her career. Over the course of the summer of 2020, Mohammed worked with Northwestern University to establish an efficient way to provide basic civic education and facilitate voter registration to first-year students and transferees at DePaul University. She saw that students were uniquely susceptible to a large number of barriers while voting and wanted to find a solution. Mohammed is also the recipient of the Community Service Scholarship at DePaul University and completes 90 service learning hours every year. In addition to running for the school board for the second time, Mohammed is currently the youngest board member for The Chicago Area Peace Action Organization, the founding member and President of IGNITE DePaul and she also serves on the Environmental Committee for the Village of Lincolnwood and the Dean Student Advisory Board at DePaul University. At the age of 20, Mohammed is full of enthusiasm to change the world. 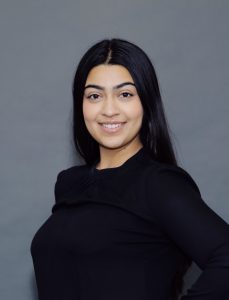